Wheelchair Ramp Study Shows SafePath Products are ADA Compliant While Most Others Are Not.

In a recent independent study of rubber wheelchair ramps, SafePath Products were verified as being ADA (Americans with Disabilities Act) compliant, while most other ramps tested did not meet the ADA standards. The study, conducted by Sotter Engineering Corporation, tested seven rubber ramps from leading manufacturers against the standards established in the 2010 ADA Standards for Accessible Design.

“ADA has specific standards for wheelchair ramps
regarding the front edge and slope of transition. However there has never been anyone monitoring
compliancy. Sotter’s study is significant because for the first time there are independent
measurements to verify manufacturer’s ADA compliancy.”

Of the seven ramps studied, only two met the ADA requirement, which states,

“Ramp runs shall have a running slope not steeper than 1:12″ (8.33%). Results of the study show that the SafePath Products ramp, with a slope of 7.0%, exceeded ADA standards and provided the most gradual slope.

Other ramps had slopes as steep as 14.5%. Sotter’s study also evaluated the side approach, which
does not have an ADA standard, but which is a concern in many applications. SafePath Products,
with a slope of 21.2%, provided the best side accessibility. Two of the ramps had no side approach,
and the others ranged from 35.5% to 76.9%.”

Read the full report at:
http://safepathproducts.com/press_releases/ramp_study_final_2017.pdf.

“Exceeding ADA standards is a cornerstone of our
product development process, so we were not surprised to have the best results in Sotter’s study.
SafePath is committed to being a compliance leader in the architectural and building industry,
eliminating structural barriers through innovative products.”

Guidelines for this study were provided by the Department of Justice’s revised regulations for Titles II and III of the Americans with Disabilities Act of 1990 (ADA), published in the Federal Register on September 15, 2010.

The 2010 Standards set minimum requirements – both scoping and technical – for newly designed and constructed or altered State and local government facilities, public accommodations, and commercial facilities to be readily accessible to and usable by individuals with disabilities.

Specific to these regulations, the following sections were utilized for this ramp study: 303 Changes in Level 303.1 General. Where changes in level are permitted in floor or ground surfaces, they shall comply with 303.

303.1. Animal containment areas shall not be required to comply with 303.

EXCEPTION: In assembly areas, aisle ramps adjacent to seating and not serving elements
required to be on an accessible route shall not be required to comply with 405.

EXCEPTION: In existing sites, buildings, and facilities, ramps shall be permitted to have running
slopes steeper than 1:12 complying with Table 405.2 where such slopes are necessary due to
space limitations. 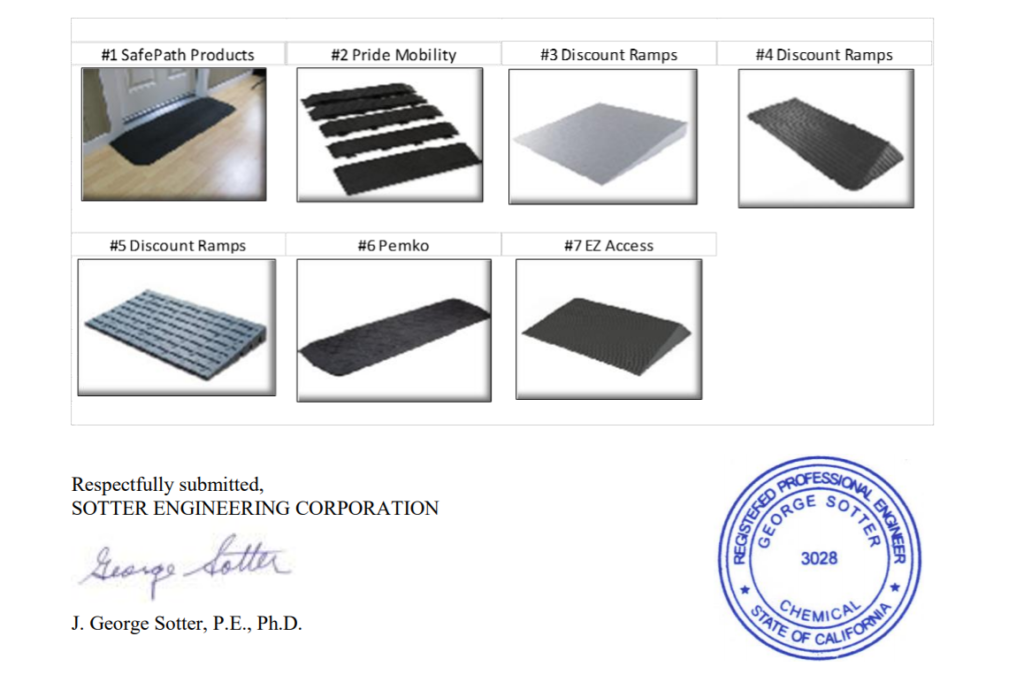